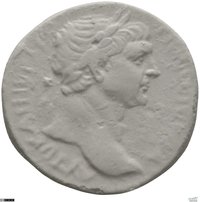 "Ulpia Marciana (August 48 – 112) was the beloved elder sister of Roman Emperor Trajan. She was the eldest child born to Roman woman Marcia and the Roman senator Marcus Ulpius Traianus. Her second name Marciana she inherited from her mother’s paternal ancestors. Her birthplace is unknown.

Marciana married Gaius Salonius Matidius Patruinus. Patruinus was a wealthy man, who served as a praetor and later became a senator. He originally came from Vicetia (modern Vicenza in northern Italy). She bore Patruinus a daughter and only child Salonina Matidia, who was born on July 4, 68. Patruinus died in 78 and Marciana never remarried. After Patruinus’ death, Marciana and Matidia went to live with Trajan and his wife." - (en.wikipedia.org 31.01.2020)